POWELL, Wyoming — Is it a sculpture? Is it a light? Northwest College alumnus Roland Simmons of Cowley creates artworks begging both those questions. An exhibit of his Lumalights opens Tuesday, Oct. 13, in Northwest Gallery.

The “Roland Simmons: Where Light and Imagination Meet” installation launches with a 7 p.m. artist’s reception in the gallery, located in the Cabre Building on the Northwest College campus in Powell

Simmons’ creations range from 36-90 inches tall in various colors and undulating shapes that have withstood the test of time, holding up to four decades of change in artistic trends, architectural design and home and office décor.

That record is made even more impressive when considering the material used to make the lights—single face corrugated paper.

The genesis of these enduring artworks traces back to the late 1960s when Simmons was a junior at Brigham Young University majoring in industrial design. Feeling inadequate compared to his fellow painting, sculpting and drawing students, and convinced his professors, if given a chance, would’ve voted him the “student most likely to fail,” Simmons walked into class one day with a three-dimensional homework assignment that changed everything.

“My teacher looked at it. Held it. Turned it around and around and spent extra time examining it,” Simmons said. When the teacher announced, “I think you’ve got something,” he also ordered his previously underperforming student to spend the rest of the semester developing the idea further.

The object inspiring this sudden change in course was made from an 8-by-4-inch rectangle of single-faced corrugated parchment that Simmons scored and folded into a modular shape with six sides.

Simmons took his professor’s order to heart, developing and refining his process, even making it the topic of his master’s degree thesis. After a short stint in the industrial design field, he launched his own company in 1976 and has made his living ever since producing LumaLights.

The lights earn their nickname, “zipper lamps” from the trademark zipper that allows them to collapse for shipping.

“I’m amazed at the visual pleasure derived from a sculptured sheet of parchment as natural light plays upon its surfaces,” Simmons said. “Equally pleasing are the transformations that occur as natural, external light is replaced by artificial light from within, which produces a soft and peaceful light source.”

The lamps, featured in a 1996 issue of Condé Nast House & Garden, have won numerous awards and can be found in homes and offices around the world. Each one carries Simmons’ signature and date of creation.

Also included in the exhibit is one LumaLight made from a plastic material.

“Roland Simmons: Where Light and Imagination Meet” is displayed in Northwest Gallery through Nov. 13.

Located in the Cabre Building, Northwest Gallery is open from 9 a.m. - 4 p.m. weekdays and Thursday evening from 7 -9 p.m. Admission is free. 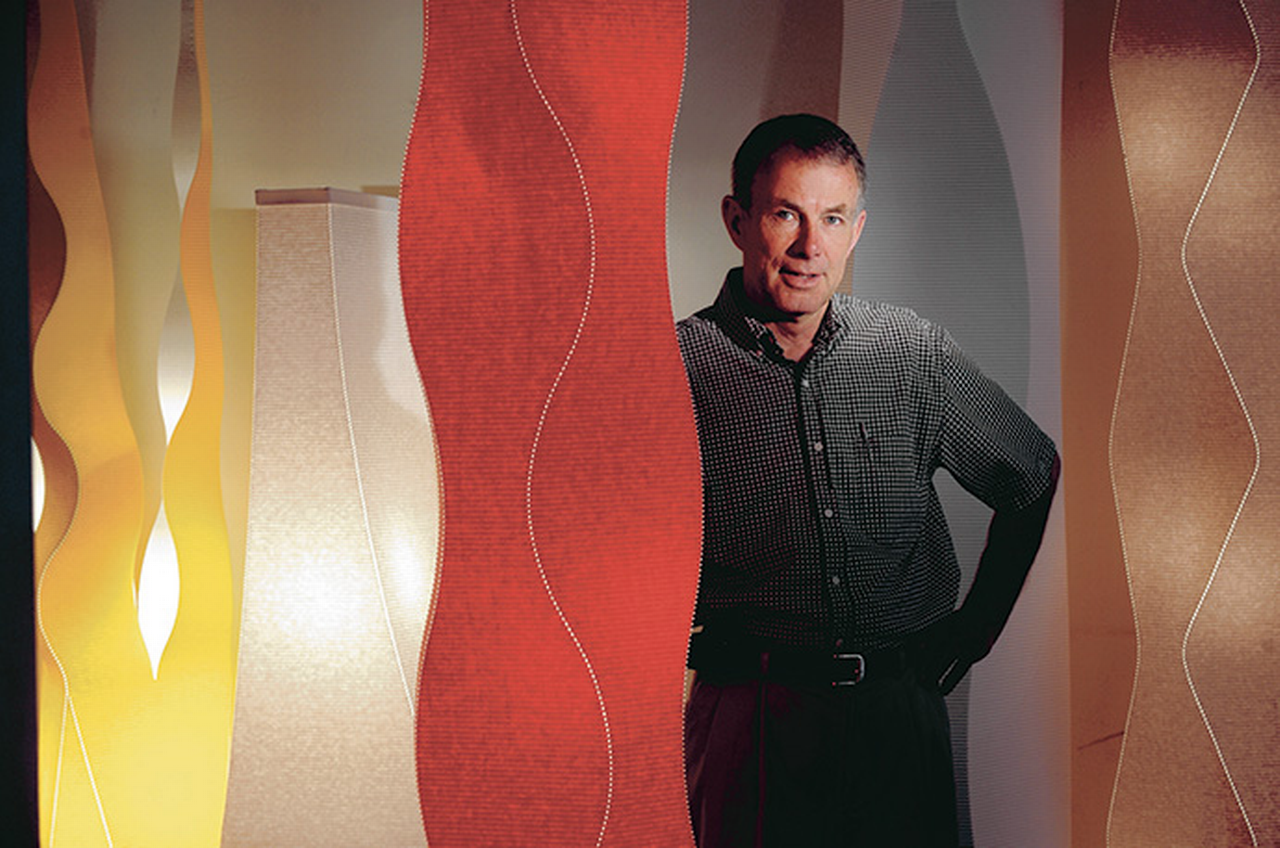