Kate Vincent is an active composer, educator, and performer who is very excited to return to Northwest College as a faculty member after recently living in the greater Phoenix area. She is a native of Laramie, WY, and has previously attended school at Northwest College (Powell, WY) and Colorado State University (Fort Collins, CO), and in May of 2019 she graduated with a M.M. in Music Composition from Arizona State University. Vincent has studied many facets of music including classical piano performance, classical vocal performance, music composition, and jazz studies (primarily) on saxophone.

During her academic studies she received the Music Department MVP award from Northwest College, the Wendel Diebel Music Performance Award from Colorado State University, a Teaching Excellence award from Arizona State University, and has also received recognition with ASCAP’s Herb Alpert Young Jazz Composer Award. Vincent is a highly sought after clinician and educator; she has been the Vocal Jazz Director at the Yellowstone Jazz Camp and the Yellowstone Summer Music Camp, and was a founding member of the education-based company NoCo AMP (Northern Colorado Academy of Marching and Percussion). As a performer, Vincent has played in an eclectic mix of musical settings and styles including Hip-Hop, Ska/Punk, and Funk/Rock/Soul based groups, as well as in pit orchestras for Musical Theater companies, and as an accompanist for soloists, chamber ensembles, and choral ensembles. She has had the privilege of sharing the stage with many artists and groups, most notably and recently including the Phoenix Symphony, Michael Dease, Dee Alexander, and Sean Jones. 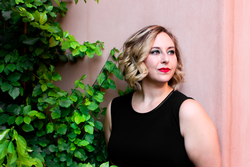