Get 'em while you can - advance tickets to Jan. 27 Red Steagall concert going fast

POWELL, Wyo. - Fans of “Cowboy Corner” Red Steagall, a radio celebrity to listeners across the country, now have a chance to see him perform in person at 7:30 p.m. Thursday, Jan. 27, at the Nelson Performing Arts Center in Powell, Wyo.

Known as the great American storyteller, Steagall is the featured entertainment at the Jan. 27-28 Spring Roundup 2011, a business-focused conference for agriculture producers.

Tickets are $25 per person or two for $40. They’ll be sold at the door, but advance tickets are recommended because of limited seating.

They’re being sold at Dan’s Boot and Saddle and the Northwest College Bookstore in Powell. They can also be reserved by calling Stacy Gilman at 307-754-6062.

Steagall has become synonymous with the lifestyle of the American West through his success as a recording artist, songwriter, cowboy poet, rancher, television and motion picture personality. 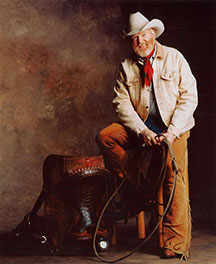 He’ll perform his poetry and songs in Powell much the same way he did in 1983 at the White House for President Ronald Reagan.

His audience has expanded since then, in large part because of “Cowboy Corner,” his one-hour syndicated radio show broadcast on over 170 stations in 43 states. Those who’ve only heard his voice on the radio might not suspect it belongs to a tall man with a beard and cowboy hat who looks like a cross between Charlie Daniels and Kenny Rogers.

Steagall’s biggest success in the recording industry was in the 1970s when he had 26 consecutive records on the national charts. Best known for his Texas swing dance music, he’s also recognized for “Here We Go Again,” “Party Dolls and Wine,” “Freckles Brown” and “Lone Star Beer and Bob Wills Music.”

His music has garnered eight Wrangler Awards from the National Cowboy and Western Heritage Museum for music.

Fans of the popular Benji movies recognize Steagall from his starring role in “Benji the Hunted.” He also appeared in “Dark Before Dawn” and “Abilene.” And on the other side of the camera, he produced the 1990 movie “Big Bad John,” starring Jimmy Dean, Jack Elam, Ned Beatty and Bo Hopkins.

Steagall’s first book, “Ride for the Brand,” is a 168-page collection of poetry and songs embracing the western lifestyle. He’s followed that with three more: “The Fence that Me and Shorty Built,” “Born to this Land” and “Cowboy Corner Conversations.”

Among his many other activities, he also hosts the annual Red Steagall Cowboy Gathering in the Stockyards National Historic District of Forth Worth, Texas.

His personification of the ideals of the Old West have landed him in no fewer than 10 cowboy and country halls of fame. Among many other honors, he’s been both the poet laureate and the official cowboy poet for the state of Texas, as well as cowboy poet laureate for the City of San Juan Capistrano, Calif.

Steagall isn’t the only one with name recognition at the Spring Roundup 2011. The two-day conference boasts a lineup of names familiar to those in the agriculture industry.