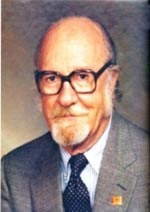 In 1947, about a year after Northwest College began offering classes in a Powell High School building, John Taggart Hinckley, newly appointed professor of Political Science and History, formed the first college library collection. This initial library amounted to about fifteen books, but by 1949, the collection numbered 100 titles and was bursting off the two shelves allotted in the high school. Professor Hinckley then talked the Powell Public Library director into making space for the college's collection in the Carnegie library building.

During the fall of 1949, the college moved classes and faculty offices from the high school into the "grade school bungalow" or "white house," a remodeled barracks from Heart Mountain Relocation Center located on the high school campus. But it wasn't until 1952 that the library moved into a room of its own in this building. The new library room had plenty of shelving for the collection and tables so that students could study between classes.

In 1954, the college passed its first bond issue to construct Orendorff Building and Johnson Fitness Center. When the Orendorff Building opened in 1957, John Hinckley and several students moved the library, now numbering more than 1,000 volumes into a room in this building.

By the 1960s, the college decided that the collection and library use merited a separate building of its own. With the opening of the Frisby Library (current Frisby Building basement) in 1966, the collection finally had a place to grow. Funds were short to keep the building open during the evenings however, so faculty members took turns as the "evening librarian."

By the 1980s with larger library collections, greater need for technology and expanding specialized services, the library had again outgrown its space. In the spring of 1983, the 21,000 square foot John Taggart Hinckley Library opened to house a collection of 39,000 volumes. Named for Professor Hinckley, who had been so instrumental in starting library service at Northwest, the building included an electronic security system, a seminar classroom, foreign language listening labs, an art display, reading area, computer/typing rooms and an amphitheater for small group performances, lectures, and poetry readings. 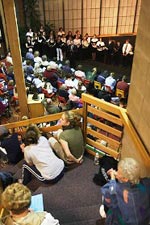 The new building was designed for the future and by 1987, it contained a computer lab for student use. Then, in 1990 Northwest College joined CARL, the Colorado Alliance of Research Libraries . For the first time, library holdings, as well as the holdings of 75 other college, university, and public libraries, were available via computer. Six computer terminals in the library building, allowed students, faculty, and staff to search library collections all over the Rocky Mountain region. Hinckley Library was the first community college in Wyoming to become a full member of the CARL consortium.

In 1997, Hinckley Library left CARL and joined the Wyoming Libraries Database (WYLD) a consortium of ninety public and academic libraries in Wyoming. Through this organization, Northwest College students, faculty, and staff have access to library resources, electronic databases, and state resources in digital form. To find materials throughout Wyoming, search the library's catalog, WYLDCAT.